(Ed. Note ~ I wrote this post two years ago when I first realized Geneva was in danger of being sold and/or transformed into a profit-making venture.  I am getting the feeling that people are interested in visiting Geneva.  If you go, go with respect of nature and God in mind.  If you go because it’s a sacred place and you want to feel God’s presence, I would recommend going three or four hours after eating a meal and without rushing through it.  Nor anxiety if you don’t connect with God the first time you go.  It may take you more than a few times to feel God’s  presence and understand.  Perhaps God wants to see if you’re really serious about it.  It might help, too, listening to 60s spiritual music — Day by Day, “Joy” by Apollo 100, Get Together by the Youngbloods, etc.)

So…going back to the church I grew up in…I was informed that Geneva, the summer camp I attended when a youngster, is in trouble.

It’s funny because I was just there with my kids on that Saturday prior to Mother’s Day, and I said that I hoped nothing ever happened to this place.

Little did I know…

I went during the magical time of the late 60s and early 70s.  My counselors were my first teachers about the environment.  I remembered being yelled at because we took a shortcut through the woods instead of using the already created path.  It causes more erosion to use the shortcut, hence the counselor getting upset.  And when I say “yelled at” I mean a stern talking to — not berating us.  I also learned to identify trees by their leaves.

The cabins were natural wood with the boys on one side and the girls on the other, with a fireplace in the center.  The cabin below is the one I stayed in several times: 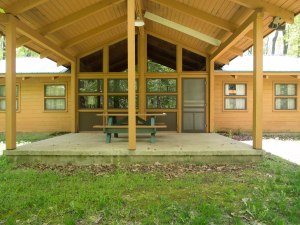 I learned crafts such as pressed flowers, making candles by using cardboard milk cartons, sand, and then pouring the wax inside.  I also learned plaster of paris artwork, and basketweaving.

This is the camp that I learned how to row a canoe.   It was such a powerful experience that to this day, I still cherish the memory of the beauty of  the  Tippecanoe river.

In this area, we roasted marshmallows and hotdogs, told stories, and yes, we sang “Kumbaya” and “We Shall Overcome” as the counselor played guitar.  It’s sad that Kumbaya is now an object of derision.  If memory serves me, it comes from Africa, and means “Come By Here, Lord”.

We also made delicious homemade ice cream by using a hand crank ice cream maker.  We all took turns cranking it so no one had the burden.  We all shared in the labor…hmmm…what a concept. /snark

During the week, each cabin (there were five) created some form of entertainment to be performed on Friday night, our last night there.  One year, we did a skit that involved us being parts of a car.  Our guy counselor and another had a gentle rivalry going on, and he named the car sales after the other counselor.  And of course, we, the car, broke down. 🙂

In addition to the wooded area, there were two meadows where all of the cabins would gather for singing.  As I walked through there, I thought this could be a place to hold the Midwest version of Woodstock, minus the nudity and drugs.  It’s just hard to describe the feeling of the place — like it’s hard to describe the positive light and love of the 60s and early 70s to the younger generations.

And with that thought, it would be great if we could have a concert there to benefit Geneva.  They made bad decisions in building condos there to bring in income, but instead it has caused them to go in debt to the tune of $500,000.  I asked if we could come up with that money, whether Geneva could sustain itself and the answer I got back was “yes”.

I don’t want to see this turned into a non-profit, which is what they are leaning towards if they can’t come up with a way to save it.